The Day of the Dead is a beautiful Mexican tradition where people who have died are venerated. Today we share simple and easy ideas on how to make a Dia de los Muertos Altar or Ofrenda at home. As an immigrant family, we really like being able to share our Mexican traditions with our children. Today I show you how with affordable materials that you can get at Dollar Tree, Home Depot, and Amazon you can make your own Altar for Day of the Dead at home as a family activity. You can also find Día de los Muertos Altar ideas in this post. 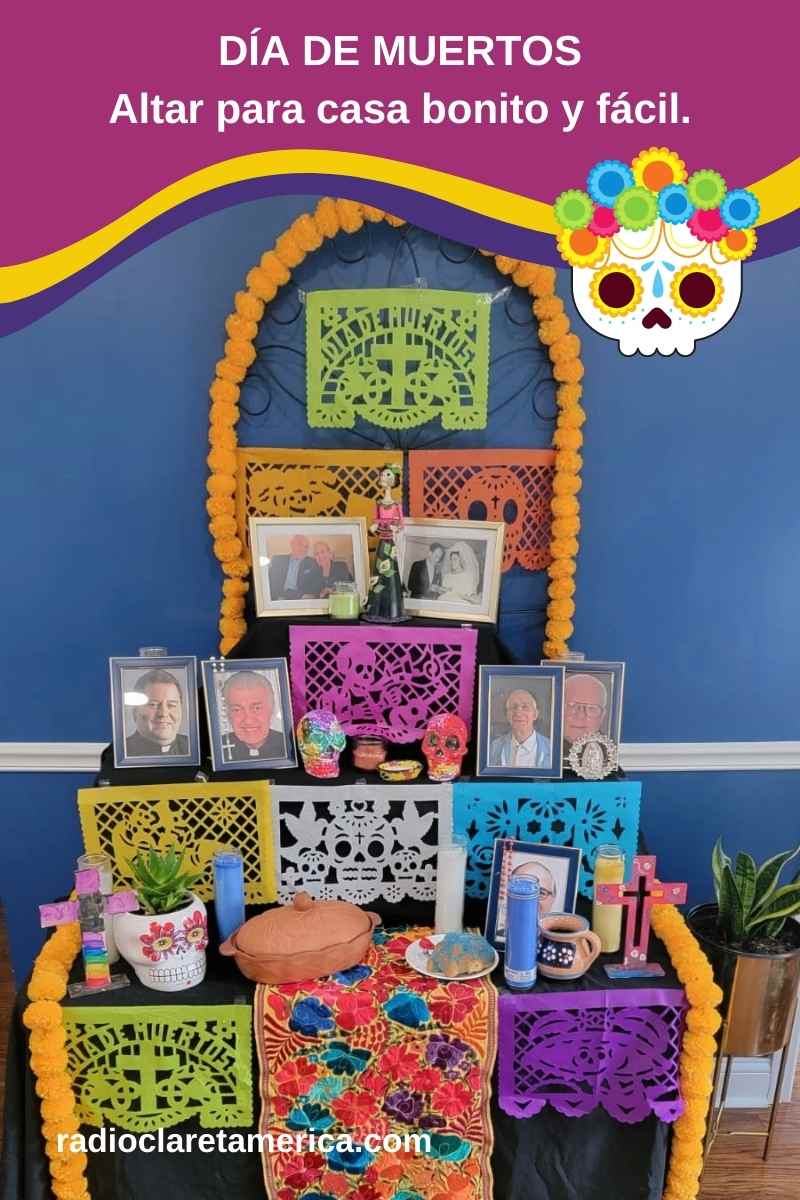 What do I need to make a Traditional Dia de los Muertos Altar? 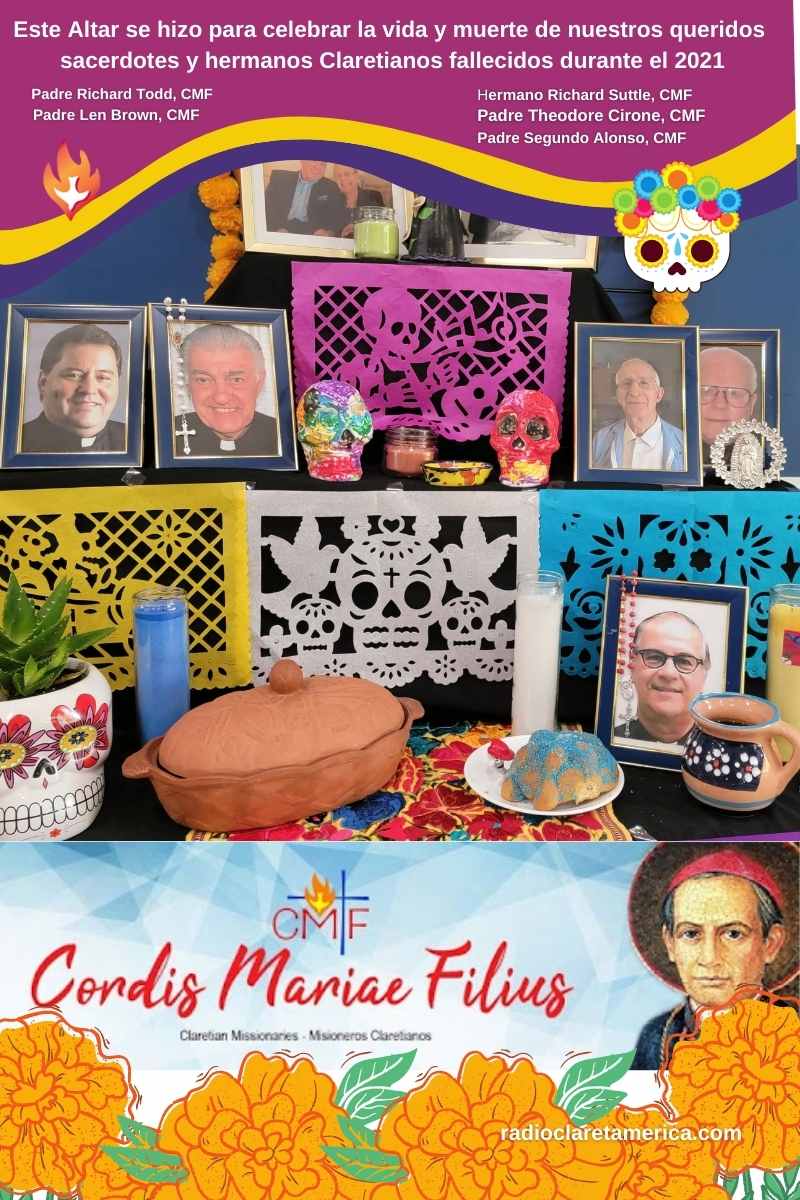 How to decorate a Dia de los Muertos Altar

I believe the arch that goes behind the altar for a day of the dead is the difficult part. You can make it by tapping the flowers straight to the wall but we found an easier way that looks much better! I remembered seeing metal garden vine bases at Home Depot that ended in an arc. That was the solution to achieve a simple arch that we covered with marigold flowers. 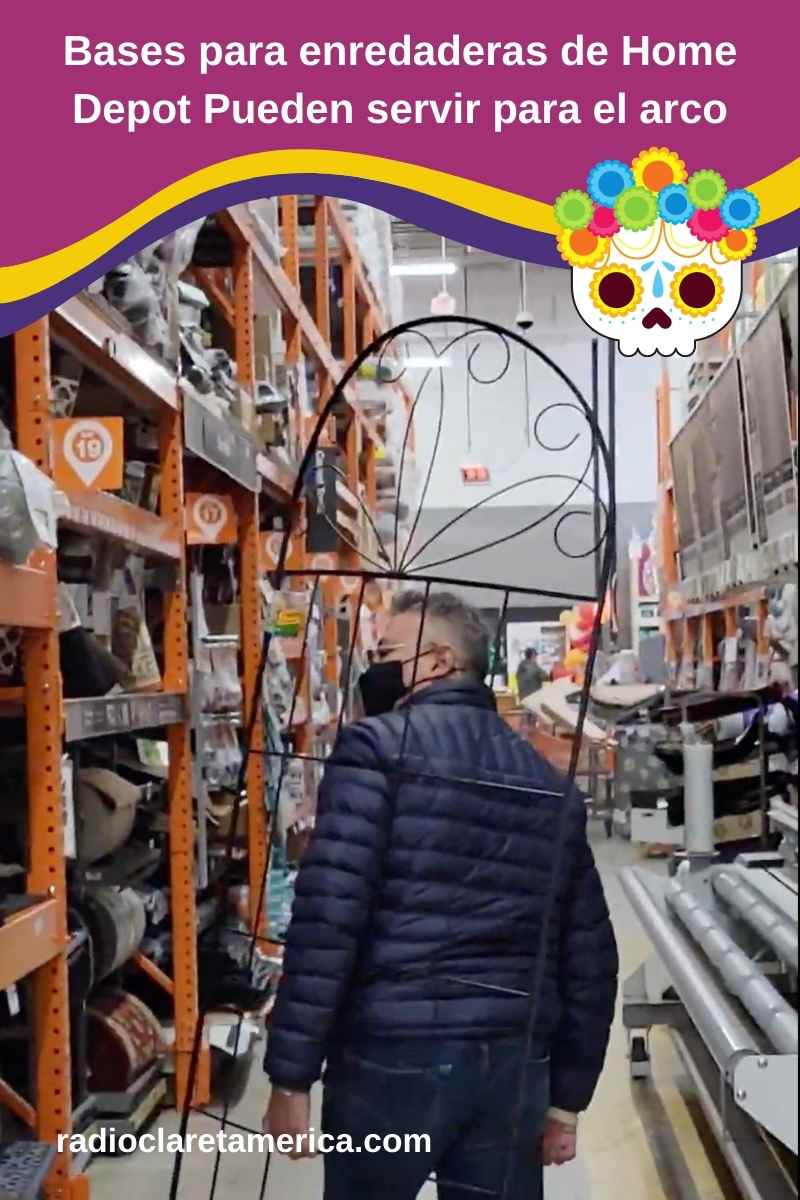 Where to find Cempasúchil flowers in the United States

Marigold flowers are known in Mexico as cempasúchil and they are the traditional decoration de Day of the Dead Altars. Look on Facebook Market if there is a nearby place where they have marigold flowers for sale. I’ve seen that there marigold flower plantations in California and some vendors ship across the country for a shipping fee of less than $ 5. I found some plastic Cempasúchil flowers on Amazon. They look very pretty and you can use them for the years to come. They come in a garland which makes it very easy to add to the decoration. When they arrive they come very compact, put them in the dryer in cold air for a minute or two and they inflate and look very natural. Click here to see artificial flowers. 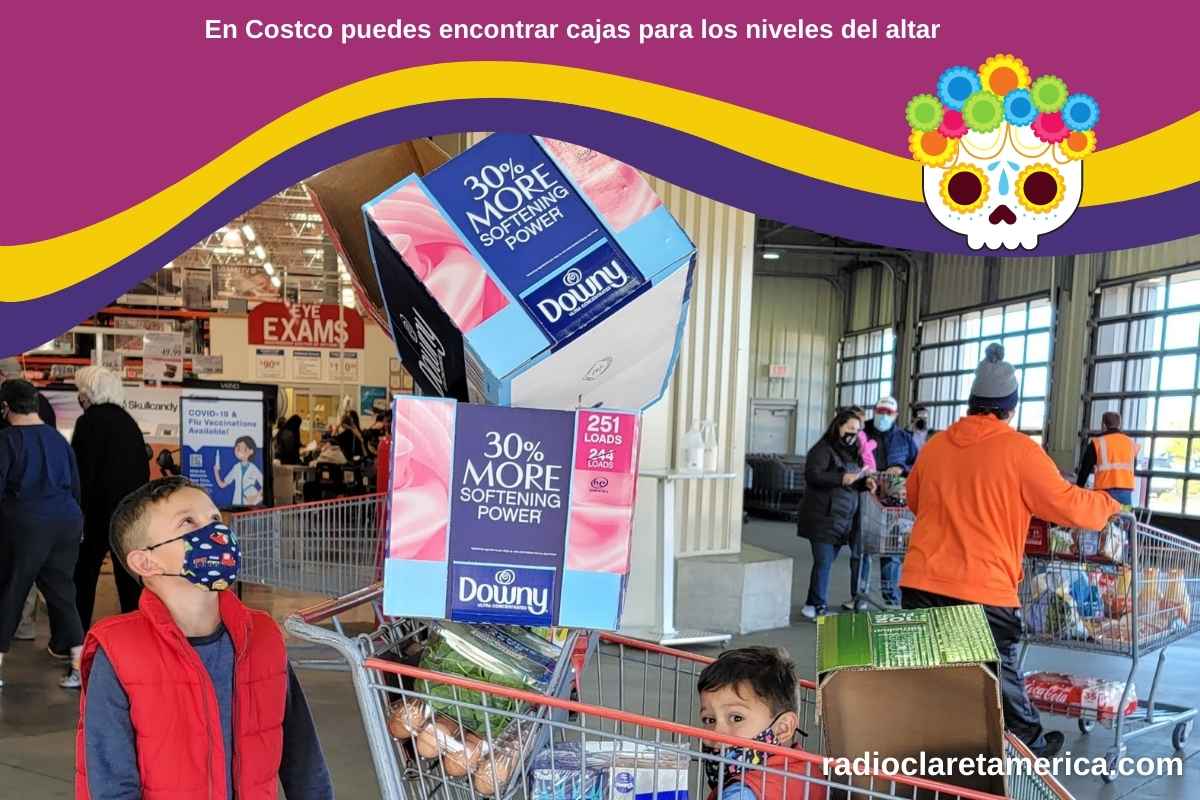 Take the measurements of the width and length of your table and accordingly look for boxes that you can use for the levels. We went to Costco and came back with a bunch of boxes that worked perfectly. Remember that each level decreases in size. The original altars have 7 levels for which you would need a firm base of wooden drawers on each level. We created a small altar with 3 levels. In our case, the most important thing is that the children get involved in the tradition and have the opportunity to talk with them about our family who has died already and they did not have the chance to meet. Like my husband’s parents, their paternal grandparents.

After placing the boxes, we covered everything with a black tablecloth. We use black because the shredded paper, Mexican Papel Picado, looks much better over dark colors, we think it gives it more color but you can use any color. The traditional one is white.

Place the tablecloth on the table, fold around the middle and place the following boxes on top and cover them with the tablecloth and so on progressively until the entire altar is covered. 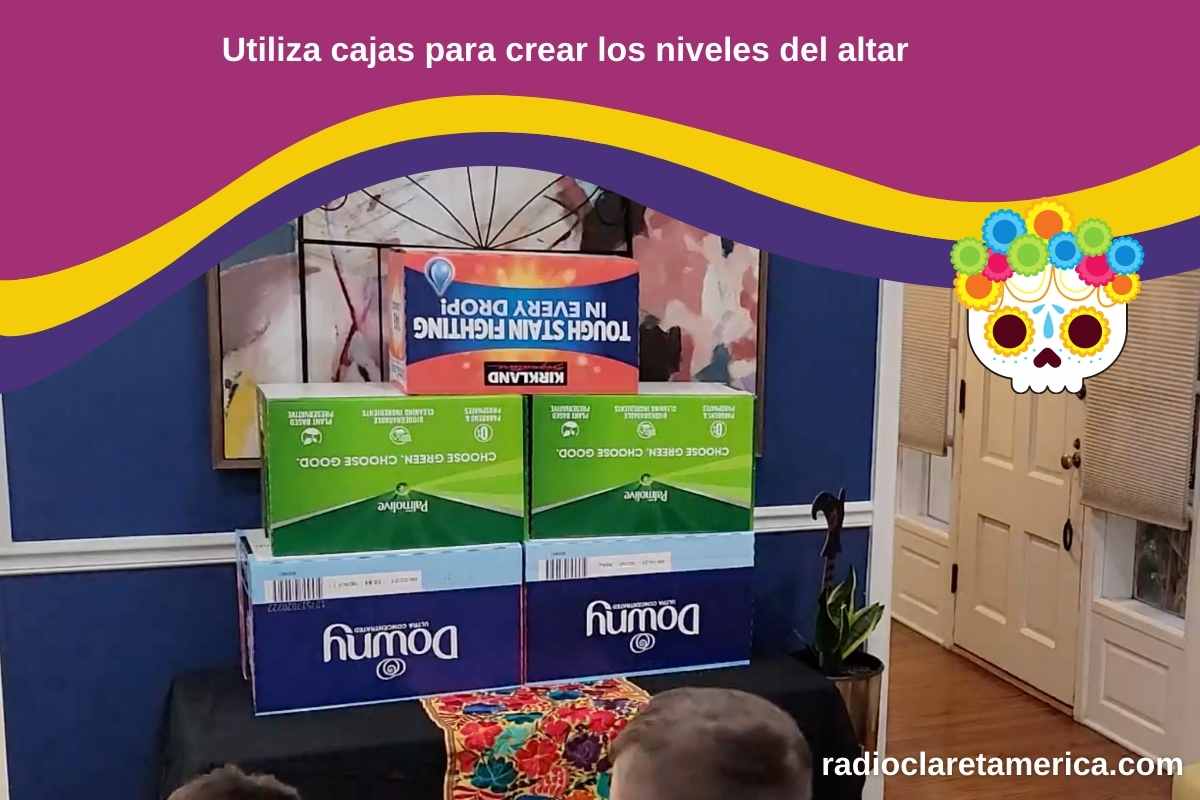 How to decorate an altar for Día de los Muertos

The simplest way is with Mexican papel picado. You can stick it on each of the levels of the altar, it gives it a lot of life and color and after this you can add the things that the altar carries, here I share a list of simple elements to have a beautiful and dead altar at home. simple. Click here for papel picado of the day of the dead.

What to put on Dia de los Muertos Altar

The altar of the dead in a traditional home must bear the following:

What day should the altar of the dead be placed 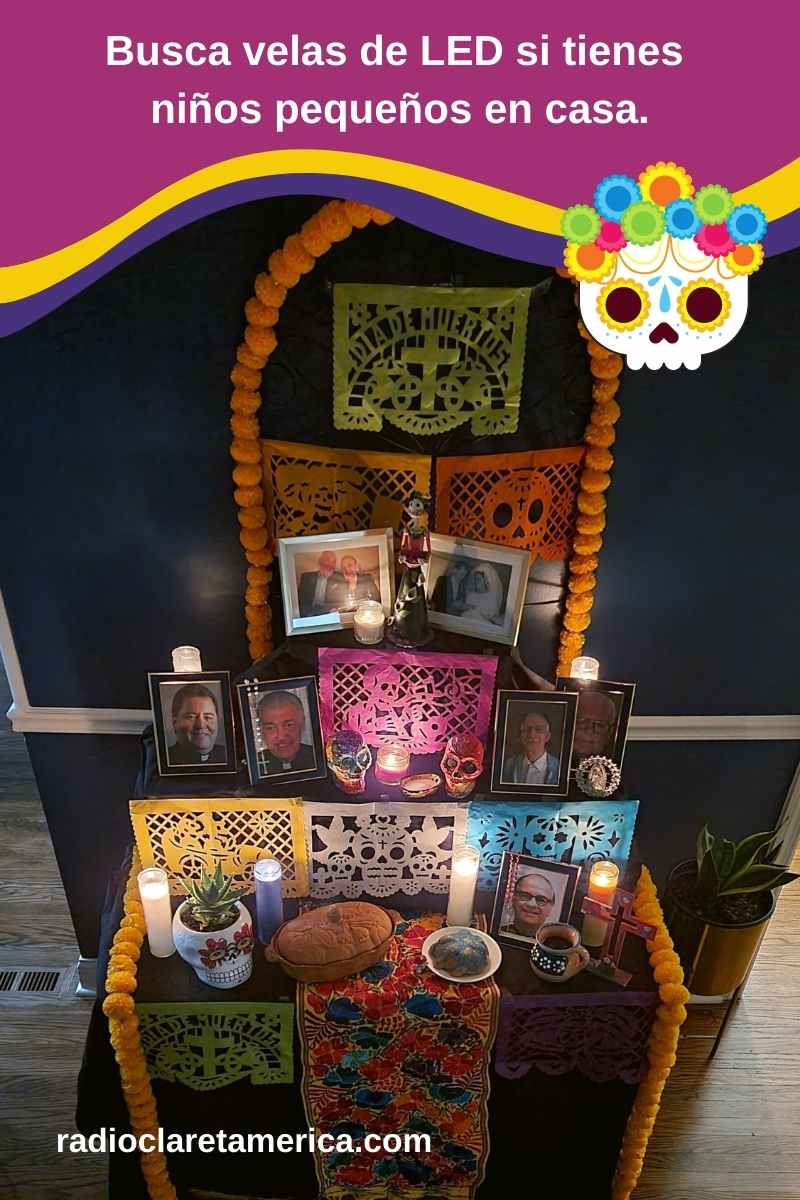 What Day is the Día de Muertos Celebrated in Mexico

Catholic Altar of the Dead

The altar of the dead is a pre-Columbian tradition, at the arrival of Catholicism this tradition prevailed and the date of celebration was made to coincide with the Day of the All Saints. Some Christian elements have been added to the traditional altar, such as the marigold cross that represents how Christ defeated death. For the ancients, the marigold flower represented the sun, so roads were made from it that could guide the deceased to the land of the living on altars. This is why this Mexican flower is so emblematic on the altars of the dead.

The meaning of the celebration comes from our culture and traditions. Death is not venerated, it is mocked through skulls, imagining that it was a character through the literary genre of calaveritas. In the devotion to the holy death, death is venerated as if it were a being at the level of God who could ingest and protect human life. Devotion to Santa Muerte is demonic and should not be misleading.